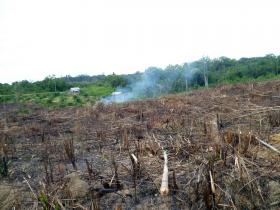 In the past decades, large areas of forest in Sumatra, Indonesia have been replaced by cash crops like oil palm and rubber plantations. New research, published in the European Geosciences Union journal Biogeosciences, shows that these changes in land use increase temperatures in the region. The added warming could affect plants and animals and make parts of the country more vulnerable to wildfires.

Palm oil is the most widely used vegetable oil in the world, appearing in the ingredients’ list of many consumer goods, from chocolate to soap. Indonesia, the world’s largest producer of palm oil, has seen large swathes of rainforest cleared away and replaced by oil palm plantations at rates that exceed those of Brazil. On the island of Sumatra, which has had the highest loss of native rainforest in all of
Indonesia, the changes in land use have meant a substantial loss of animal and plant diversity.

However, the impact of these changes on the region’s temperatures had not been studied until now.
An international team of researchers, led by Clifton Sabajo and Alexander Knohl from the University of Göttingen in Germany, have published a new study showing that the expansion of oil palm and other cash crops in Sumatra has made the region warmer. “Land use change from forest to cash crops such as oil palm and rubber plantations does not only impact biodiversity and stored carbon, but also has a surface warming effect, adding to climate change,” says Knohl, a professor in bioclimatology.

The team studied differences in surface temperature for various types of land cover, such as forests, clear-cut land, and cash crops, in the Jambi province of Sumatra. They used satellite data collected between 2000 and 2015 by the NASALandsat missions and the MODIS instrument, as well as data collected on the ground.

Image: This clear-cut land, cleared for a small-holder palm oil plantation, is characterised by remains of previous vegetation and a patchy landscape. The image, taken in December 2013, is distributed under a Creative Commons, Attribution, Share-Alike license. (Credit: Clifton Sabajo)